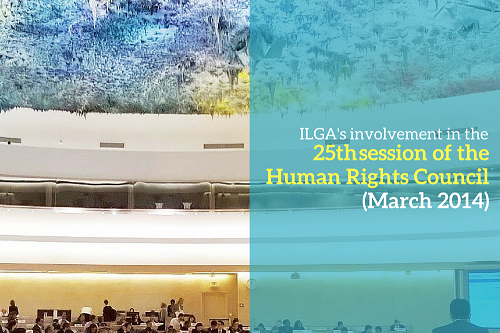 ILGA’s involvement at the 25th session of the Human Rights Council (HRC):

INTERACTIVE DIALOGUE WITH THE SPECIAL RAPPORTEUR ON TORTURE

This statement, prepared by a coalition of intersex activists from around the world, thanks the Special Rapporteur for the historical decision of including intersex issues in his report on abuses in healthcare settings and calls on States to put an end to the human rights violations affecting intersex people.

This joint statement by ILGA, COC Netherlands, and Micro Rainbow International commends the Special Rapporteur for highlighting cases of discrimination in the private housing sector during her mission to Indonesia and strongly supports her recommendation to the government to repeal laws, policies, and practices which perpetuate discrimination in access to adequate housing of marginalized groups, such as LGBT people.

The 25th session of the HRC included the adoption of reports from the 17th UPR session (countries included Saudi Arabia, Senegal, China, Nigeria, Mexico, Mauritius, Jordan, Malaysia, Central African Republic, Monaco, Belize, Chad, Israel, Congo, and Malta). ILGA worked with activists from Nigeria and Malaysia to prepare and help deliver statements during the UPR adoptions at the 25th HRC. Click here for the full report on the outcomes of the 17th UPR session final adoption of country reports at the 25th session of the UN Human Rights Council.

Rejected recommendations: Take legislative and practical steps to guarantee that LGBTI persons can enjoy all human rights without discrimination; Introduce legislation that will decriminalize sexual relations between consenting adults of the same sex; respect the fundamental rights of LGBT persons; Enact legislation prohibiting violence based on sexual orientation.

The panel noted that violations are not perpetrated independently but are rather reinforced by cultures of impunity. The panel also highlighted that homophobic laws being promulgated in countries like Nigeria and Uganda, as well as state-sponsored homophobic activities in Russia, India and other parts of the world, are actually part of wider culture of hetero-normativity and gender-stereotyping, often seeking to impose rigid gender norms. This, coupled with a culture of impunity leaves LGBTI persons and other communities vulnerable to human rights violations.

The event can be viewed here in full in two parts: