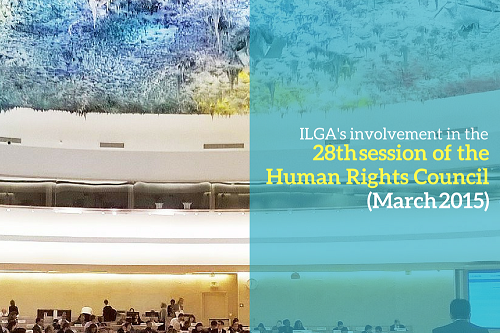 ILGA's involvement at the 28th session of the Human Rights Council (HRC):

ILGA's joint statement with Muslims for Progressive Values (MPV) statement highlighted the violence carried out in the name of religion against lesbian, gay, bisexual, transgender and intersex (LGBTI) persons that takes place in all regions. States have a responsibility to take action to prevent this from occurring and religious and education curricula should be disseminated which would counter extremist narratives that incite violence in the name of religion. Click to read the statement.

Accepted recommendations: Introduce gender equality issues, as well as non-discrimination and non-violence due to gender identity and sexual orientation in education programmes, in school regulations and in the training of teachers; Expeditiously and fully investigate and prosecute acts of violence and discrimination targeting women, indigenous, and lesbian, gay, bisexual, transgender and intersex (LGBTI) persons and guarantee an effective remedy to victims and their families.

Noted recommendations: Repeal or modify legal norms that deny or limit the rights of people based on their sexual orientation or gender identity.

ILGA welcomed Bolivia’s efforts on non-discrimination, but regretted that the recommendation on derogation of legislation that limited the rights of persons with a different gender identity had not been adopted. ILGA urged the Government to overcome the gap and to institute same-sex marriage.

During the second cycle of the UPR, El Salvador accepted two recommendations on SOGIE issues and noted five recommendations. ILGA noted the declaration of good intent by the Government to eradicate discrimination and violence based on sexual orientation and gender identity. Violence against lesbian, gay, bisexual, and transgender persons was on the rise, and investigation and prosecution of acts of violence must be ensured.

Accepted recommendations: Adopt measures guaranteeing the protection of women, who are victims of discrimination and violence on the grounds of their sexual orientation or gender condition; Take all necessary steps to ensure the effective implementation of legislation seeking to combat violence against women and girls, and take specific measures to protect those who are victims of violence based on their sexual orientation and gender identity.

Click to read the joint statement by COMCAVIS El Salvador and ILGA.

Iran received 13 recommendations on SOGIE issues and noted all of them. A joint statement with OutRight Action International (formerly the International Gay and Lesbian Human Rights Commission (IGLHRC)) delivered during the adoption of the UPR report expresses concern over Iran's rejection of the recommendations relating to the rights of lesbian, gay, bisexual and transgender persons. Iran remained one of the few countries on earth to consider consensual same sex relationships punishable by death. Click to read the statement.