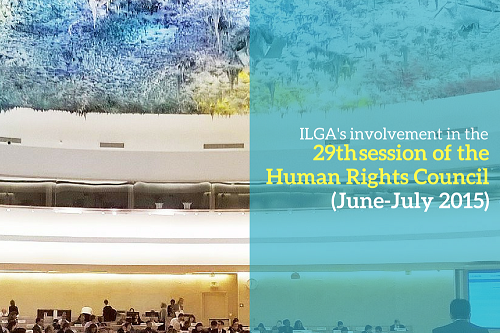 ILGA's involvement at the 29th session of the Human Rights Council (HRC):

ILGA coordinated the preparation, sign-on and delivery of a joint statement made by over 400 civil society organizations, calling on governments to take concerted action at the HRC. ILGA also made, supported or was involved in the preparation and delivery of more than a dozen SOGI-specific statements made in the plenary by SOGIEI civil society. These included statements in response to discussions on the SOGI report itself, Trans rights, intersex rights in the context of FGM, Violence Against Women, the right to education for every girl, Freedom of Expression, Peaceful Assembly, the Right to Health, Discrimination against women, Women's Rights, and extreme poverty.

The four co-sponsors of the last SOGI resolution (Brazil, Chile, Colombia and Uruguay - sometimes referred to as the LAC4 by the SOGI community) held a side event prior to the start of the HRC to discuss the new SOGI Report that was released a few days ago. Read the report in English, French, or Spanish.

In addition to the LAC4, Albania, Malta and Montenegro also spoke from a state perspective, as well as member of the UN Committee on Economic Social and Cultural Rights and a representative from ARC-International. The LAC4 confirmed they had no plans for a SOGI-specific resolution at either HRC29 or at HRC30 in September 2015. They did, however, organize a large joint statement signed by more than 70 States from all regions showing international support for SOGIEI and expressing commitment to non-violence and discrimination.

There was a Protection of the Family resolution brought by Egypt and a core group comprised of Bangladesh, Belarus, China, Côte d’Ivoire, El Salvador, Mauritania, Morocco, Qatar, Russian Federation, Saudi Arabia, and Tunisia, seeking to protect the family as the “natural and fundamental group unit of society”. An amendment presented by South Africa, Brazil and Uruguay to recognize that in different cultural, political and social systems “various forms of the family exist” was blocked by a procedural “no-action” motion from Russia. The resolution was ultimately adopted, but serious concerns were registered by states from all regions.

A resolution on Violence Against Women passed by consensus, including for the first time ever wording on comprehensive sexuality education. Read the resolution in English, French, or Spanish.

INTERACTIVE DIALOGUE WITH THE SPECIAL RAPPORTEUR ON EXTREME POVERTY

While the Special Rapporteur did not specifically mention LGBTI groups, his analysis of group based inequality was applicable to the LGBTI community. ILGA made a statement in the interactive dialogue making the connection between extreme inequality and discrimination on grounds of sexual orientation, gender identity and intersex status. ILGA called on States to take immediate steps to prohibit all forms of discrimination and to ensure that LGBTI people are included in their poverty reduction strategies. States should also increase their access to formal education, quality health services, equal employment opportunities, decent treatment at work, full social benefits and guarantee other means for LGBTI people to step out of poverty. ILGA also called upon the Special Rapporteur on extreme poverty and human rights, Mr. Philip Alston, to ensure that LGBTI people are systematically included in the mandate’s future reports and country missions.

SPECIAL RAPPORTEUR ON VIOLENCE AGAINST WOMEN, ITS CAUSES AND CONSEQUENCES

ILGA notes in their statement to the Special Rapporteur that States must move to a systematical response to eliminate all forms of violence against women and girls, which is a systemic problem. In all efforts made to address VAW, States must include disaggregated data, which identifies ways in which women experience intersectional discrimination, including targeted violence of LBTI women. LBTI women and girls across the globe urge Member States dedicate targeted and sustained funding to ensure any legislation and policy on violence against women is implemented with measurable goals and review mechanisms - ensuring concrete, positive impacts on the lived experiences of LBTI women.

ANNUAL FULL-DAY DISCUSSION ON THE HUMAN RIGHTS OF WOMEN

This joint statement with Allied Rainbow Communities International notes that gender non-conforming individuals, such as lesbians, bisexual women, as well as trans and intersex persons, are particularly at risk for discrimination and violence within the family, and that many States do not adequately protect against this type of violence. ILGA urges Member States to heed the recommendations of the Working Group to actively work to eliminate gender stereotypes perpetuated through gender-based violence within families.

During this panel discussion, ILGA observed that states must repeal any laws, including state-enforced religious or secular laws that reinforce patriarchy and limit girls’ access to education. All efforts to uphold the right to education of girls must take into account intersectional discrimination, including on the basis of sexual orientation, gender identity, intersex status and many other grounds including faith. School curricula must also include comprehensive education on sexual health; reproductive rights; sexuality; the diversity of genders, identities and bodies; and family life – including non-traditional families.

During the 29th session, the Human Rights Council adopted the UPR reports for 14 countries including Kyrgyzstan, Kiribati, Guinea, Lao, Spain, Lesotho, Kenya, Armenia, Guinea-Bissau, Sweden, Grenada, Turkey, Guyana, and Kuwait. ILGA worked with activists from Turkey, Kenya, and Kuwait to prepare and help deliver statements during the UPR adoptions at the 29th HRC.

ILGA notes with concern the increasing violence towards people due to their actual or perceived sexual orientation or gender identity and urges the Kenyan government to take all necessary measures to ensure the protection of LGBTI people in Kenya.

Click here to read the joint statement by the Gay and Lesbian Coalition in Kenya and ILGA :

In this statement, ILGA expressed its concern about the deteriorating situation of the human rights of lesbian, gay, bisexual and transgender persons in Kuwait, who suffered discrimination, stigma and lack of access to almost all services, including necessary health service.

ILGA, in a joint statement with OutRight Action International (formerly the International Gay and Lesbian Human Rights Commission (IGLHRC), welcomed Turkey’s statement affirming that discrimination against the lesbian, gay, bi-sexual, and transsexual community would not be tolerated, and thanked Turkey for ensuring the punishment of violence against them. It urged Turkey to bring its domestic laws in line with international legislation to prohibit and prevent discrimination on the basis of sexual orientation.

A full list of UPR recommendations and responses given is outlined in the report of the session by Allied Rainbow Communities International (also available in French).