(Geneva, 17 February 2021) - The UN Committee on the Rights of the Child found that Finland failed to consider the best interests of the child of a lesbian couple when rejecting his asylum request, and to protect him against a real risk of irreparable harm when the family had no other choice but to return to Russia.

“This is a ground-breaking decision: it is the first asylum-related case from the UN system involving a child who is facing specific risks on the grounds of his mothers' sexual orientation, and of the family they form together”, said Kseniya Kirichenko, Programme Coordinator at ILGA World. “This is also the first time that the UN Committee on the Rights of the Child made a decision on sexual orientation issues, and the first case on children in same-sex families in Treaty Bodies’ practice altogether”.

The Committee’s decision concerned an application filed on behalf of A. B., now 11, who had fled Russia together with his mothers after the family faced harassment and threats, and he had started to suffer from bullying and isolation at school.  These were the years when regions across Russia had started to introduce so-called “anti-propaganda laws”, which have contributed to an increasingly hostile environment against people of diverse sexual orientations, gender identities and expressions. Legislation that bars “promoting non-traditional sexual relationships” was eventually adopted in 2013 at the national level.

Fearing for their safety, the family fled to Finland, where the child started to attend school, made friends, and no longer had to live in fear of calling both of his parents “mother” and of talking to anyone about his family.  However, Finland rejected their application for asylum: authorities recognised the past experiences of threats, bullying and discrimination; nonetheless, they concluded that these could not be considered as amounting to persecution.

The family was left with no other choice but to return to Russia. However, the complaint against Finland reached the United Nations, where in February 2021 the Committee on the Rights of the Child concluded that Finland “failed to adequately take the best interests of the child as a primary consideration when assessing the author’s asylum request based on his mothers’ sexual orientation, and to protect him against a real risk of irreparable harm in case of return to the Russian Federation”.

“This is an important decision, setting out necessary standards for the protection of children in LGBTI families who are at heightened risk of discrimination, especially in countries like Russia, where LGBTI people face stigmatisation and hostilities in their everyday lives”, said Arpi Avetisyan, Head of Litigation at ILGA–Europe. “States must always ensure that the best interests of the child are effectively and systematically taken into account in the context of asylum proceedings, and that they are not discriminated based on their parents’ sexual orientation.”

While finding Finland in violation of articles 3, 19, and 22 of the Convention on the Rights of the Child, the UN committee pointed out that the state “is under an obligation to provide an effective reparation to the author, including adequate compensation.”

The decision has the potential to bring about change. “In the past, we have seen that international decisions on lesbian, gay and bisexual asylum seekers actually led to giving the applicants residency in the respondent States”, concluded Kirichenko. “We hope that Finland will also ensure that this family will be able to come back and to finally have a happy and safe life”. 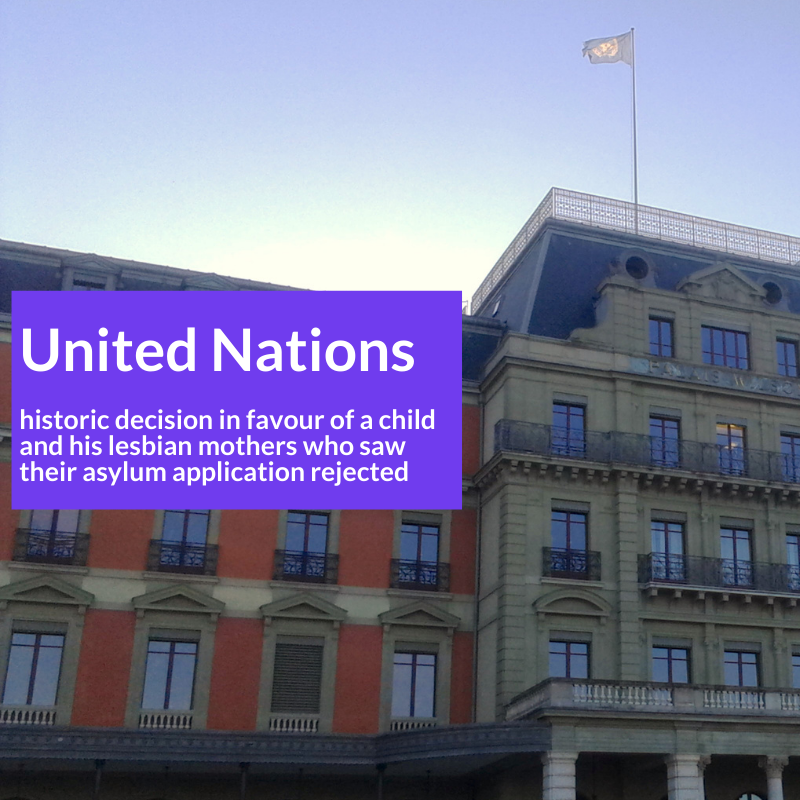 Press releases on the case