The day also marks the closure of the annual Bisexual Awareness Week (BiWeek), and on this occasion we sat down – albeit virtually - with ILGA World’s Co-Secretary General Luz Elena Aranda and with the Chair of our Bisexual Committee Rāwā Karetai Wood-Bodley.

Together, they told us about their personal journeys as activists, the human rights situation of the bisexual community globally, and on how we can collectively chart ways forward. “We are invisible, and we need to help change this trajectory together.” 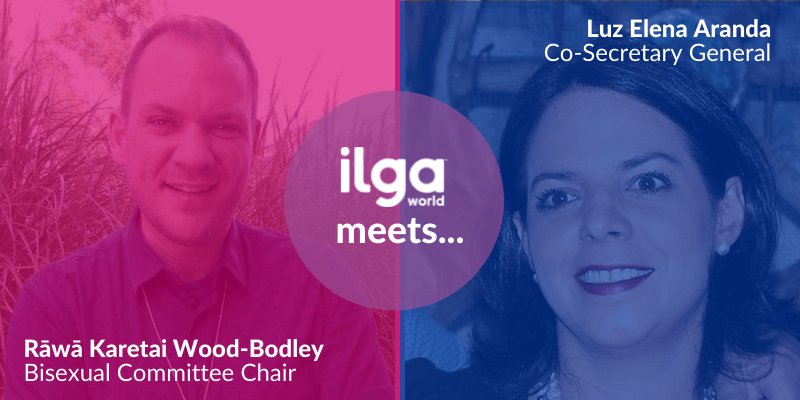 Can you tell us about your stories? How did you become activists for the human rights of bisexual people and the LGBTI community at large? Was there a specific moment that made you decide you wanted to be involved in first person?

Luz Elena Aranda: I began my journey as an activist on the stage of a theatre, with a monologue about a young woman who took an HIV test and had to wait 15 days to know the results. The play reflected what happened to her in those 15 days. HIV opened the door for me to the work of organized civil society and the work for the rights of young lesbians and gay men. Bisexual youth were not mentioned.

Feminism was a watershed for me, the glasses I would never take off, my new way of life. Thanks to feminism and feminist organizations I understood what it meant to be a woman in an unjust and oppressive system, a system that teaches us how to act, how to think, what to desire and who to love.

Working with lesbian partners made people think I was a lesbian, having a male partner made people think I was straight. Until it got to the point where those labels started to make me uncomfortable. No, I wasn't a lesbian, but I wasn't straight either. The door of bisexuality opened for me like a carnival. And then my whole battle became personal.

Rāwā Karetai Wood-Bodley: I identify as a person with multiple, intersectional identities. Firstly as an indigenous person from Aotearoa me te Waipounamu, the South Island of New Zealand, and a person from the great Pacific Ocean. I am also disabled, and my sexual orientation is 'androphilic', or the attraction of masculinity regardless of gender (for short, I use queer and bisexual). I find myself being on this earth as having been brought up with the spirit of service embedded within the very fibres of my being.

Culturally the indigenous peoples of New Zealand and the Pacific instil the values of 'Manakitanga' or the spirit of reciprocity, kindness and looking after others. Everything I have done in my advocacy stems from the spirit of helping work within the community and the communities I find myself living in.

At university, for example, I found myself heavily involved in student politics. Following my transition out of university and finally allowing myself to explore my sexuality, I found myself engaged in the LGBTI+ community and leading the marriage equality campaign in New Zealand after working in Parliament for the Green Party.

Ever since I have made sure that LGBTI+ politics and advancing human rights where I can is at the core of everything I do. Even now, I'm primarily working in the disability sector, and equity and human rights are essential to me. Especially supporting Māori, Pacific, disabled people, cultural migrant minority groups, and rainbow (LGBTI+) people continues to drive me in everything I do as I identify as having lived experience of all of these groups.

“The door of bisexuality opened for me like a carnival.
And then my whole battle became personal”
– Luz Elena Aranda

As Chair of our Bisexual Committee and the Co-Secretary General of ILGA World respectively, you have a particular vantage point on the situation for the global bisexual community. Are there struggles and human rights demands that are common to all bisexual persons globally on the ground of their sexual orientation? and are there local, intersectional specificities to these struggles?

Rāwā Karetai Wood-Bodley: I think it's still very evident that the bisexual community and other sexual orientations linked to the umbrella term ‘bisexuality’ still suffer from discrimination and erasure. People from both the LGBTI+ and broader society still see bisexuality as a phase, as being promiscuous, (and think) that you can't trust a bisexual in a relationship, or that bisexual people are confused about who they're attracted to.

In many ways, the global bisexual movement has been left behind politically for generations. The movement has been excluded from decision-making entities or so-called umbrella LGBTI+ organisations that represent each acronym letter.

Like so many other minorities within our rainbow community, bisexual, indigenous and disabled voices aren't heard as loudly, aren't funded well and aren't serviced well by the broader rainbow community or society at large. However, the bisexual community has struggled to have a clear mandate and manifesto to either help define the problems and issues of the bisexual community or a pathway and clear guidance to help resolve the issues.

Our lives can be very isolating, lonely, and largely overlooked. For example, we know that bisexual people are likely to earn less than most gay and lesbians, which has a socio-economic impact on our ability to secure food and housing. We also know that bisexual people tend to have poorer health outcomes, more inadequate access to secure housing, higher rejection rates from family and society at large. Bisexuals are discriminated against more in the workplace and are likely to be more represented as victims of assault. All of this harms our connections with others - friendship, intimacy, and family connections. Our mental health and chances of suicidality are also represented in statistics as having adverse outcomes compared to our gay and lesbian counterparts. Add any form of intersectionality, and the consequences are even worse.

The LGBTI+ community and society need to help empower, fund and support the bisexual community to raise our voices and campaign for equity issues for the whole community, and allow opportunities for the justice of the rainbow minority voices to be realised.

"We are invisible, and we need
to help change this trajectory together."
- Rāwā Karetai Wood-Bodley

I think that biphobia is a global attitude, it comes from heterosexual people, lesbian women and gay men, but also from oneself. Being bisexual means a constant coming out, justifying the partner or partners that you decide to have, explaining why you are not heterosexual enough but not homosexual enough either.

And of course, violence and discrimination are experienced more strongly by the most vulnerable communities - by women, by people in rural areas, by indigenous people or people with disabilities: this happens all over the world. The world still belongs to white heterosexual cisgender men.

“The turning point of truly raising awareness
of bisexual human rights globally
is when society actively supports the bisexual community
throughout the year.”
- Rāwā Karetai Wood-Bodley

What would you identify as turning points in raising awareness of bisexual human rights situations globally?

Rāwā Karetai Wood-Bodley:  Every year, we have these weeks come and go with the fanfare of changing our social media tiles and logos etc., only to change them back to the usual brand at the end of the week, or to ignore bisexual human rights globally for the rest of the year. The turning point of truly raising awareness of bisexual human rights globally is when society actively supports the bisexual community throughout the year.

Once we, the bisexual community, can agree on a manifesto and pathway forward with the support of funding and access to time and resources, and work collaboratively together as a global community, we will help change the tide of realising bisexual human rights globally. Sadly, however, we are still at the very early stages of realising this dream and aspiration.

Harmful stereotypes are so pervasive that even public awareness campaigns often try to dismantle them by defining bisexual people based on what they are not ("We are not confused", "We are not greedy"…). However, popular culture has slowly opened up spaces for role models to come forward: do you feel that this is contributing to shift the narrative around bisexuality?

Luz Elena Aranda:  Things have changed, yes, but the change has been very slow. The narratives around bisexuality continue to reinforce stereotypes (being confused, untrustworthy, promiscuous, etc.).

The series The L Word is a clear example of this, the life and work of different lesbian women and one of the bisexual characters, Jenny, dies by suicide at the end of the series. The new serie The L Word: Generation Q that was launched a couple of years ago tries to incorporate other identities that had not been touched in the first one - trans or non-binary people, for example. But in these 15 years that passed between one production and another they didn't think it would be important to bring in a bisexual character. INVISIBILITY.

The organizations and institutions that fight for the human rights of LGBTI people do not feel the need to promote specific actions for bisexual people: it is thought that, if you are a bisexual person, you are already included in other agendas, depending on the partner you have. The partners we have do not define us - neither bisexual people nor anyone else.

Rāwā Karetai Wood-Bodley:  With the rise of the internet, social influencers, celebrities and online streaming of TV, we are witnessing a change of culture and understanding that bisexual people do exist, that we live alongside everyone else in society, that we are just as diverse a group as any other. Seeing these narratives and lives of people living and navigating culture is indeed helping improve people’s chances of navigating society safely, but we still have so much more to do. It's time we unite for a better future.

"Things have changed, yes, but the change has been very slow.
The narratives around bisexuality continue to reinforce stereotypes"
- Luz Elena Aranda

If you could share some tips for allies to the bisexual population, both within and outside the LGBTI community, what would they be? How does bi inclusion really look like?

Rāwā Karetai Wood-Bodley:  Our allies are overlooking us, we are invisible, and we need to help change this trajectory together.

When bisexual people aren't being invited to join your conversations and participate in partnership and co-produce solutions, we are missing an opportunity to improve their lives. That statement rings true for any minority group, disabled, trans, bi, intersex, people of colour, indigenous and cultural minority groups. It's time we start to include and invite these minority groups into our spaces and work in true partnership.

Luz Elena Aranda:  My only advice would be: Don't imagine what it means to be bisexual, how we have sex and with whom, how often… Bisexual people are everywhere: come and ask, you will see that we are not so different.