Geneva, 28 June 2022 - In just a few days, two international sport governing bodies have issued new policies that actively exclude trans women athletes from competitions comporting with their gender identity, and target women with some intersex traits – and did so presenting them under the misleading frame of comprehensive ‘inclusion policies,’ ILGA World said today.

FINA – the International Swimming Federation – announced a policy that went into immediate effect, forcing all elite athletes to undergo a compulsory assessment to determine their chromosomal sex as a precondition for their participation in elite competitions. The policy especially targets women athletes, who would be called to “establish to FINA’s comfortable satisfaction that they have not experienced any part of male puberty before age 12”.

A few days later, the International Rugby League (IRL) decided to temporarily ban athletes who have transitioned from male to female from international competition – announcing further consultation and research before their policy is finalised. 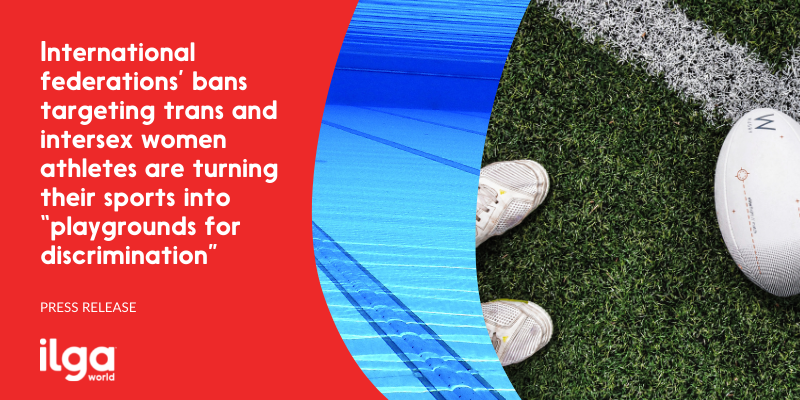 “Sport is a fundamental right, and a powerful tool to promote inclusion and respect for all. But these sport governing bodies have decided to take the route of exclusion instead, with decisions that infringe on the very human rights standards that they claim to uphold,” said Julia Ehrt, Executive Director at ILGA World.

Moreover, these decisions are likely to set an extremely dangerous precedent, to extents that are already visible: according to reports, World Athletics president Sebastian Coe has already hinted that track and field could soon follow suit and “review its trans and DSD (differences in sex development) athletes’ policies at the end of the year”.

These sudden decisions come at a time when human rights are increasingly under attack, and sports have become a battlefield – even if women in all their diversity have participated in sports for years without any issue.

“These decisions seem to follow extremely concerning and regressive developments in society at large: the policing of the bodies of women in all their diversity, and the exclusion of trans and intersex women under the false pretense of ‘fairness’”, said Luz Elena Aranda, Co-Secretary General at ILGA World. “These policies not only target a restricted group of athletes but expose the whole sporting community to a disproportionate scrutiny of their bodies, and contribute to aggravate the discrimination that trans and intersex women and girls keep facing in their everyday lives.”

“We urge the FINA and the IRL to review their policies, and not to turn their sports into a playground for discrimination.”