* report (in English - in Spanish)
* compilation of references

UN Treaty Bodies are independent committees of experts that monitor how States comply with the international human rights law treaties they ratified. Although none of the treaties explicitly mentions either LGBTI or SOGIESC, the practice of Treaty Bodies has developed during the past two decades to include these concepts, feeding into rules and norms that keep shaping international law.

“One in two UN member States undergoing their periodic review in 2019 received SOGIESC-inclusive concluding observations”, explained Kseniya Kirichenko, Programme Coordinator at ILGA World on UN advocacy, women and training. “The committees are continuing to listen to human rights defenders on the ground, and their recommendations keep guiding States towards better standards of protection for people of diverse sexual orientations, gender identities and expressions, and sex characteristics”. 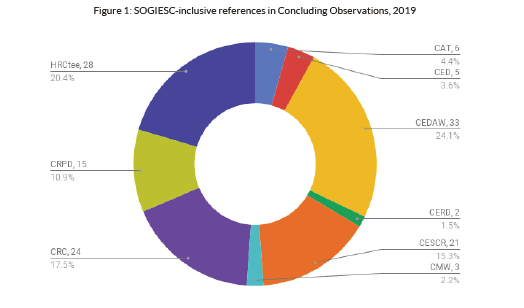 2019 has seen significant advances in how Treaty Bodies address LGBTI human rights: 43 States received their first-ever recommendation on SOGIESC issues from the committees. Eighteen specific references were made to trans people’s realities – including one urgent recommendation to Kazakhstan; 20 more recommendations uniquely addressed intersex persons’ rights – an all-time high. On the other hand, only one recommendation explicitly referred to lesbian women, and none to bisexual people: the majority of the references made by Treaty Bodies throughout the year, in fact, did not distinguish between the situation of LB/TI women and the situation of LGBTI populations in general.

“Both the unprecedented growth in intersex-specific recommendations and the changes to references to LBTI women in comparison to 2018 show how important it is for human rights defenders to actively engage with the Treaty Bodies,” commented Julia Ehrt, Director of Programmes at ILGA World. “Our experience is showing that the more human rights defenders engage with Treaty Bodies to present reports on the situations on the ground, and actively make their voice heard, the more positive and relevant recommendations are made. We hope that this report will be a useful tool to guide the advocacy of many human rights defenders on the ground, and we welcome their feedback on the methodology we used to build this document”.

In 2014, ILGA World started compiling and analysing how UN committees address the multi-faceted realities LGBTI people live in across the globe. Six years of research have clearly shown fundamental progress: not only issues that are relevant to LGBTI communities are receiving sustained attention, but they have translated into recommendations that have become more impactful, more detailed and increasingly aware of cultural diversities.

Contributions made by the UN Treaty Bodies help bring change on the ground. In November 2018, for example, the Human Rights Committee made urgent recommendations to Sudan regarding restricting the death penalty - including when imposed on the grounds of ’sodomy’. Just a few days ago Sudan abolished the death penalty for consensual same-sex sexual acts, months before its report to the Committee on the issue was due.

Between 2014 and 2019, SOGIESC-inclusive recommendations went up by more than 250%. In at least 9 individual cases, the Treaty Bodies found human rights violations on the grounds of sexual orientation and gender identity: individuals and organisations had sought justice by then after all domestic remedies had been exhausted.

“These are not just figures, but recommendations and decisions that can help bring actual change for our communities where they live, as the example of Sudan shows”, explained Luz Elena Aranda and Tuisina Ymania Brown, Co-Secretaries General at ILGA World. “Thanks to the fundamental input of grassroots human rights defenders, this body of work is constantly feeding into rules and norms that shape international law.”

Treaty Bodies (Committees) are committees of independent experts appointed to review the implementation by State parties of an international human rights treaty.

Human Rights Committee (HRCtee) monitors the implementation of the International Covenant on Civil and Political Rights (1976);

Country reviews are a process whereby the Treaty Bodies review the implementation of specific treaties by State parties. After the ratification of a treaty, a State has to provide reports on its implementation periodically. Concluding Observations are the outcome of these reviews.

Reference means any mention of SOGIESC/LGBTI by a committee. The following four types of items in Concluding Observations are considered as one reference: