The United Nations Treaty Bodies are an authoritative source of international law, and have steadily contributed to protecting the human rights of LGBTI persons. A review of their activities in 2017 and 2018, released today by ILGA World, shows that references to sexual orientation, gender identity and expression, and sex characteristics (SOGIESC) made by the committees have hit an all-time high.

In 2014, ILGA World started compiling and analysing how UN committees address the multi-faceted realities LGBTI people live in across the globe. Now five years into our research, we are able to identify sustained and fundamental progress: not only SOGIESC references and recommendations have grown significantly in numbers, but they have also become more impactful, more specific and increasingly aware of cultural diversities.

Thanks to the fundamental input of grassroots human rights defenders, this body of work is constantly feeding into rules and norms that shape international law, and continues to guide states towards better standards of protection for people of diverse SOGIESC on the ground.

What change is happening?

In 2018, Treaty Bodies made a record high of 138 SOGIESC references and recommendations. This is more than 2.5 times growth from 2014, and active participation of LGBTI groups was one of the important factors contributing to this. 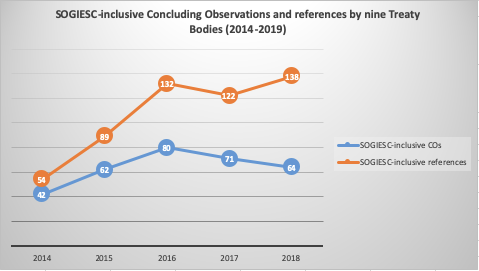 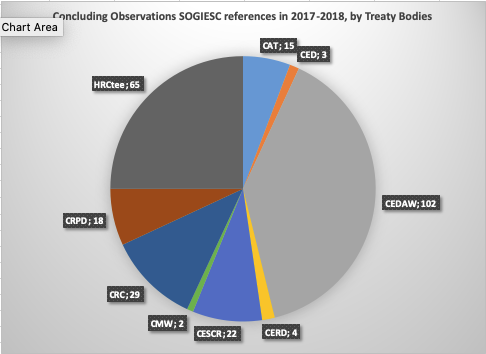 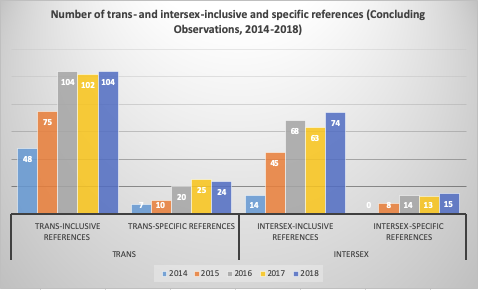 Our analysis of Treaty Bodies activities in 2017 and 2018 has shown us that some historic firsts have taken place, and that the active involvement of our communities has often put the committees in the position to listen to our voices first-hand.

The Committee on Economic, Social and Cultural Rights (CESCR), for example, received one of its first-ever shadow reports focusing on lesbian, bisexual and queer women in 2018. The information was submitted by a feminist organisation from Kazakhstan, which was also supported by ILGA World to attend the CESCR session in person. This proved crucial: committee members asked the defender about the root causes of situation affecting LBQ women in the country, and a set of questions was included in the List of Issues that Kazakhstan needed to respond to.

Mentions have also become more detailed when looking at the situation of single populations.

Both CESCR and HRCtee made their first intersex-specific recommendations to countries during 2017: a huge progress, paving the way for others that have ratified the two major universal human rights treaties monitored by these committees.

Again in 2017, the first two decisions were also made on individual complaints brought by trans persons, and this definitely could open a new page in the development of the committee’s jurisprudence.  Applying to Treaty Bodies with individual cases allows advocates to overcome impediments they faced on the national level and to obtain more in-depth analysis of their situation. But advancing a single case can contribute to positive developments in international law: this is the extent to which human rights defenders can bring about change at the global level! Our recent Strategic Litigation Toolkit has collected the experiences in the field of advocates from all over the world, as well as a list of relevant cases that other human rights defenders can draw inspiration from.

International human rights organisations like ILGA World have a role to play, too.
Our analysis indicated that, as of 2017, specific mentions to the situation of LBTI women had remained low throughout the mechanism.
This had to change, and in 2018 we worked to especially make the voices of LBQ women from around the world heard by the various Committees. This ended up having an impact on the very positive outcome recorded at the end of the year: CEDAW made the highest-ever number of SOGIESC references among all the Treaty Bodies (62), and most of the LBTI defenders that we supported managed to secure relevant recommendations for their countries.

Significant progress was also made within the HRCtee: the committee mentioned SOGIESC in the Concluding Observations of each and every country it reviewed for two years in a row, and we can see how these recommendations are becoming more specific and concrete. The example of a recommendation made to Pakistan in 2017 was particularly interesting: for the first time in all Treaty Bodies’ practice, the committee referred to the situation of hijras, a specific cultural and gender identity present in several countries. An historic first, hopefully indicating that the UN mechanisms are becoming more aware of cultural diversities.

Studying the Committees’ work helped ILGA World reshape its priorities in terms of how it was supporting LGBTI communities on the ground.

Research can indeed provide valuable resources to human rights defenders, too: our 2017 and 2018 annual Treaty Bodies reports allow them to understand how a Committee has spoken on a specific issue, to see what has been recommended to their countries, and to build on a wealth of practical advice to help shape advocacy strategies.

Our analysis, for example, shows that the CRC has a certain history of raising SOGIESC issues in its country periodic review: the committee is quite responsive to information provided by civil society, and can sometimes raise SOGIESC issues even in the absence of shadow reports. With similar background information in their hands, LGBTI human rights defenders may want to consider engaging with the committee as a part of their strategies and plans.

The ILGA World annual Treaty Bodies reports are the only comprehensive source of information on SOGIESC recommendations and other developments in this UN human rights mechanism, as the UN itself does not provide a user-friendly comprehensive database of such references.

The research looks at all the SOGIESC references made by nine Treaty Bodies, and the following specific information could be found in the reports in relation to every committee:

Alongside the main report, a compilation of references and keywords is also provided to support readers in their research. Finally, a list of civil society shadow reports to different committees is provided: if human rights defenders want to submit a report on their country, they will be able to check how others approached it.

Together, this wealth of information forms a unique tool for activists on the ground, and for all those who want to know how the United Nations are advancing the human rights of LGBTI persons. We believe that information and knowledge can indeed contribute to changing the world!

Treaty Bodies (Committees) are committees of independent experts appointed to review the implementation by State parties of an international human rights treaty.

Human Rights Committee (HRCtee) monitors the implementation of the International Covenant on Civil and Political Rights (1976);

Country reviews are a process whereby the Treaty Bodies review the implementation of specific treaties by State parties. After the ratification of a treaty, a State has to provide reports on its implementation periodically. Concluding Observations are the outcome of these reviews.

List of Issues issues or questions indicated by a Treaty Body which is transmitted to the State party ahead of the session at which the Treaty Body will consider the report. The list provides the framework for a constructive dialogue with the State party’s delegation.

Reference means any mention of SOGIESC/LGBTI by a committee. The following four types of items in Concluding Observations are considered as one reference: