The third edition of the publication researches provisions which set out how trans and gender-diverse people can change their sex/gender marker and names on official identity documents (legal gender recognition), and also collects information on laws criminalising trans identities, both explicitly and de facto – looking at the situation for our communities in every region of the world.

“To date, at least 13 UN member States worldwide explicitly criminalise trans persons, but we know that a much wider range of laws is used to target them in many more countries”, said Zhan Chiam, coordinator and co-author of the report. “Evidence collected from communities on the ground highlights how measures related to public nuisance, indecency, morality, loitering, sex work-related offences, and consensual same-sex activity amongst others are actively deployed for the same purpose. The systemic targeting of trans people using seemingly innocuous laws is just as damaging as so-called ‘cross dressing’ regulations which overtly target gender expressions.” 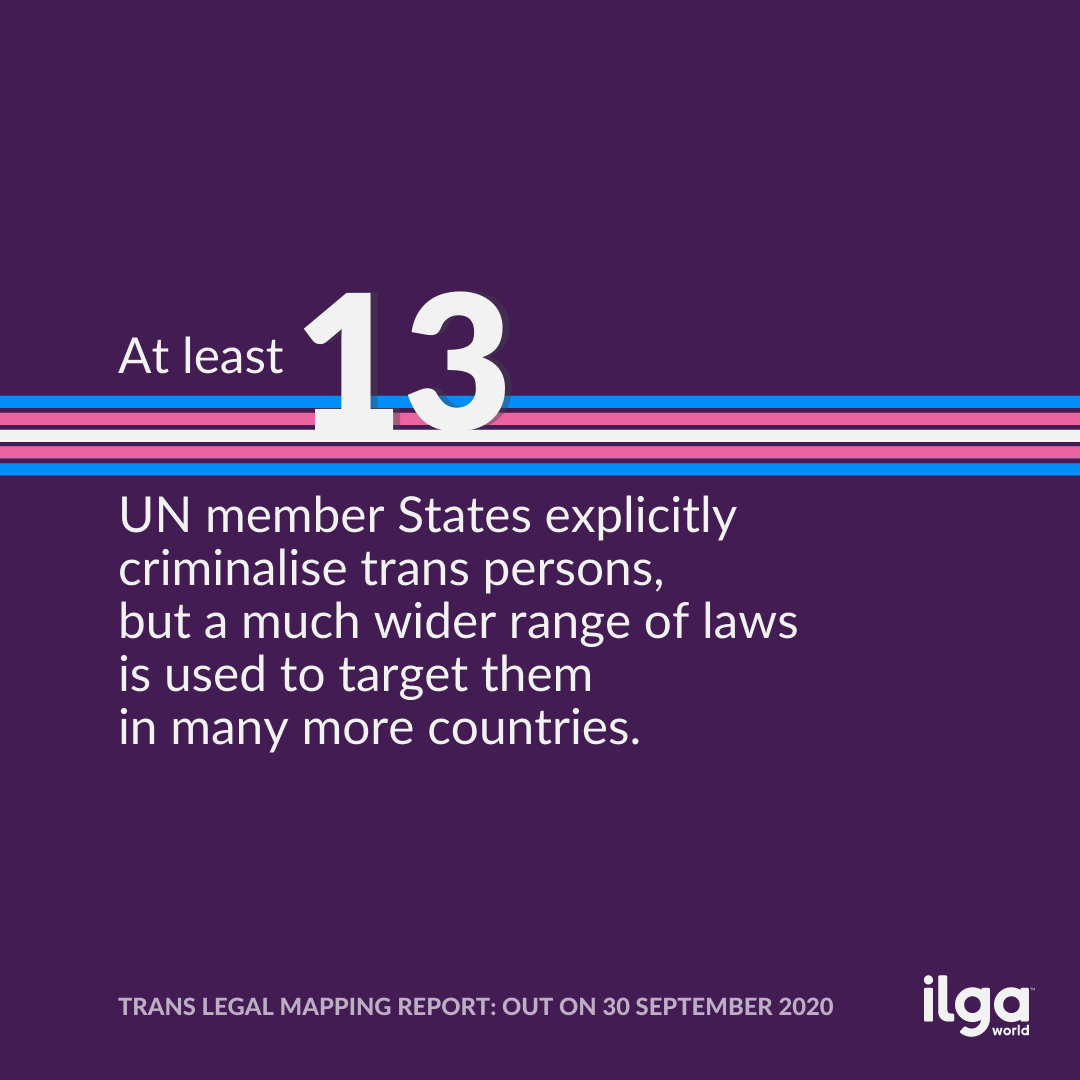 While States with explicit criminalising provisions deny trans persons of their right to be who they are, other States have made strides toward legal gender recognition based solely on self-determination - as it should be.

Since 2018, nine additional UN member States (or jurisdictions within them) have allowed people to change their name and gender marker in official registries and documents without abusive preconditions such as undergoing surgical, hormonal or sterilisation interventions, forcibly divorcing from their partner, not having dependent children, being kept in psychiatric facilities, passing a “real life test”, and more. These requirements, unfortunately, continue to be a grim reality for the majority of trans people around the world.

In Latin America, Brazil, Chile and Costa Rica have allowed gender marker changes through a self-determination model. At the same time, Chile, Colombia and Uruguay have advanced with respect to those under 18, and Argentina allows for a multiplicity of gender markers. In some jurisdictions across the world – Australia (the state of Victoria), Costa Rica and most of Canada – there is now the option to remove gender markers altogether. 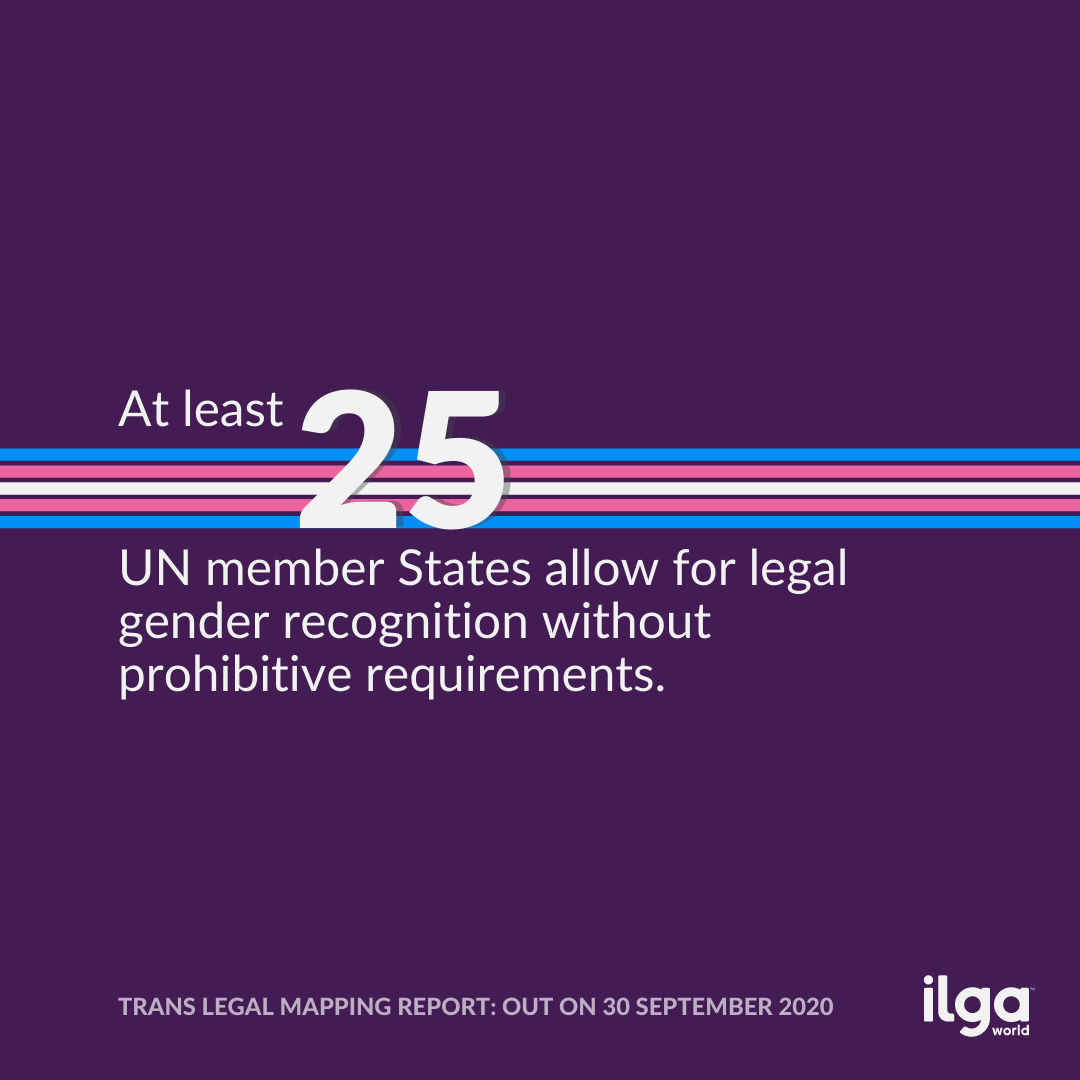 These advances, however, have come with considerable backlash. As Chiam pointed out: “In every region of the world where we have been documenting legal gender recognition, regressions have occurred, often in the form of so-called ‘gender ideology’, the emergence of exclusionary movements, and right-wing politicians positing LGBT against national identities”.

Together with an uninterrupted wave of violence and murders that continue to tamper with people of diverse gender identities and expressions worldwide, these attacks have all had detrimental effects on our communities.

“It is a difficult time for trans persons globally, which is reflected in the regression or stagnation in legal gender recognition rights in every continent”, explains Jabulani Pereira, Chair of the Trans Committee at ILGA World. “We continue to push against repressive state laws, and at the same time we will need many more studies that celebrate our challenges and gains in our right to self-determination, our right to gender-affirming care and to live in a world that does not systemically and physically harm us.”

Since the World Health Assembly has approved and adopted the latest International Classification of Diseases (ICD-11), clearly stating that being a trans or gender diverse person does not mean to suffer a mental disorder, trans organising has been at a turning point, and credible data is essential to conduct effective advocacy work.

“Now more than ever, we need accurate data, research and information to inform global activism on trans issues”, Tuisina Ymania Brown and Luz Elena Aranda, Co-Secretaries General at ILGA World, point out. “Even more importantly, this will help trans activists and allies on the ground with readily-available resources, relevant to their contexts, that they can use to make their voices heard and push for change.”

Research such as the Trans Legal Mapping Report are indeed powerful tools in the hands of human rights defenders worldwide:  they not only cast a light on how laws and regulations impact trans communities worldwide, but also offer an overview of bills currently being discussed, pending court cases, committees’ recommendations on regulations and consultations on gender recognition.

A note on terminology

Legal gender recognition:  laws, administrative procedures or processes by which a person can change their sex/gender marker and names on official identity documents

Self-determination: a model for legal gender recognition that does not include abusive requirements such as undergoing surgical, hormonal or sterilisation interventions, forcibly divorcing from one’s partner, not having dependent children, being kept in psychiatric facilities, passing a “real life test”, and more.

The Trans Legal Mapping Report distinguishes between “sex/gender marker change” and “name change” processes, laws and policies. The distinction is made because the processes are often entirely separate, sometimes involving different pieces of legislation or policies.

When referring to legislation, court decisions or policies, the report has kept faithful to the language of those documents to provide insight into the thinking behind their formulation.