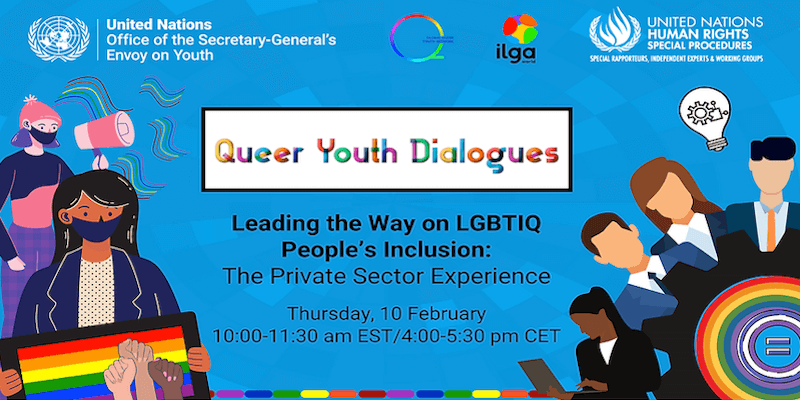 The flyer for the "Leading the way on LGBTIQ people’s inclusion: the private sector experience" event
from the Queer Youth Dialogues series

Yearly, there is a growing number of corporations showing their support for LGBTIQ people’s movement, suggesting for a community who has been for so long forced to hide in fear of violence and discrimination - a scenario that remains true in many parts of the world - that there is a move in the right direction, to more equality, visibility and respect to everyone regardless of their sexual orientation, gender identity and expression and sex characteristics.

This move towards more support and inclusion can be seen also inside these corporations. This is not, however, the norm in most cases. The LGBTIQ community faces intersectional forms of discrimination beyond their diverse sexualities or genders, that form barriers on their way to the labour market. Even when able to overcome these barriers, LGBTIQ people are still subjected to discrimination in employement, a scenario that has been depened by the economic impacts of the COVID-19 global pandemic.

Although measures to address this situation should primarily be taken through public policies implemented by governments, the key role played by the private sector is undeniable. Corporations carry the responsibility to protect inclusion, including the rights of LGBTIQ persons, internally when developing policies that apply to their workplaces and supply chains, but also in the public sphere, as they are often strong actors and significant players working to achieve human rights and the Sustainable Development Goals.

In this session of the Queer Youth Dialogues, private sector representatives and young entrepreneurs will engage in a candid discussion about ways in which companies are leveraging their influence and advocacy to accelerate LGBTIQ equality and inclusion in the workplace and in the broader communities in which they operate. The discussion will focus on the needs for inclusive leadership, the value of queer-owned businesses and generational shifts in consumer and labour market demands. The event will also showcase concrete examples of initiatives aimed at furthering this agenda.

What will I gain from joining?

Follow this link to read more and register
to secure your space in this event!

The Queer Youth Dialogues are a series of programmatic events, trainings, and connection opportunities which invite LGBTIQ+ young people from around the world to engage, build capacity, network, and share their experiences. The Queer Youth Dialogues are facilitated in partnership with ILGA World, the UN Secretary General’s Envoy on Youth, the Independent Expert on protection against violence and discrimination based on sexual orientation and gender identity, and the Global Queer Youth Network.