Skip to main content
ILGA's statement at the Public consultation with the UN SOGI Independent Expert
Submitted by Anonymous (not verified) on Thu, 01/26/2017 - 16:41

We are ILGA, the World Federation of LGBTI organisations with approximately 1200 member organisations from around 120 countries. We do not claim to speak on behalf of all of these – indeed many of our members are either in this room and will speak, or are engaging with you in other ways – but we as ILGA do have a role to play in giving a public and clear voice of LGBTI persons from around the world in the spirit of truly global solidarity.

At the outset wish to congratulate you and welcome you into this newly-created position. We are very grateful that you are embarking on such an open and transparent consultation process and look forward to working with you in the coming years. As much as we welcome your willingness to listen and learn from all stakeholders, we also not only recognise your independence as entrusted to you by the States in crating this mandate, but also will do what we can to protect that independence. In that light, we seek to share with you our perspectives as one person to another, knowing that you will be listening to many people. And as you continue to listen, we do encourage you, as we are learning ourselves, to actively give a stronger voice to those who are most marginalized and invisibilized both in life in general, but also in organizing and in consultations like these. Persons outside of Geneva and New York, Women, Intersex persons, non-English speakers, Trans persons, Lesbians, Bisexuals, to name just a few. So in that light, we would now like to share with you some things that we have learned.

The Creation of the Mandate

I think you know that we worked very hard for the creation of this mandate. And it is no secret that it was not an easy journey. Despite the great work that has been carried out by OHCHR and other UN agencies over many years – and we have heard from several of them this morning – the arrangements to protect the human rights of LGBT and intersex persons were inadequate. There was, until now, no dedicated human rights mechanism at the international level that had a systematic and comprehensive approach to the human rights situation of LGBT persons. Accordingly, we worked hard in strong alliance with people and other civil society from all over the world over many years to try and make the establishment of the mandate a reality. We encouraged governments to lead on the issue and do what they could to establish the mandate. As this happened, in June 2016, 628 NGOs from 151 countries called for the creation of the SOGI Independent Expert here at the UN. And it was created in a landmark moment. In the subsequent debates on this mandate at the HRC and then in the GA, the numbers and support for this mandate around the world has only grown.

Why the mandate: the OPs

There are many reasons that we wanted such a mandate. As you mentioned yesterday, what you are asked to do is now set-out in OP3 of the resolution. I certainly don't need to read that out to you, but I will highlight a few areas that matter to us. Paragraph 3 (b), for example, asks you to raise awareness of the violence & discrimination AND identifying and addressing the root causes. For example, the violence faced by lesbians cannot be addressed by simply looking at the physical violence on its own. Rather, the violence and discrimination faced by them can only be addressed by digging deep into issues related to the causes of poverty, their invisibility (seen even in the reluctance by so many to use the word lesbian), gender power imbalances, the lack of autonomy over bodies, the use and abuse of notions of gender to subjugate another. Paragraph (d) asks you to address the multiple, intersecting and aggravated forms of violence and discrimination faced by persons on the basis of their sexual orientation and gender identity”. For my organization this paragraph is key, recognising that SOGI issues are connected with a broad range of issues such as gender equality, poverty, class, bodily autonomy, sexual health and rights, and many many others. So we particularly welcome that you have been mandated to carry out your work in a way that recognises multiple and intersecting forms of discrimination. We know from experience that this approach is a way to really get to the core of the origin of the discrimination and violence and give attention to issues that otherwise might fall outside And, heading back one paragraph: Paragraph 3 (c) asks you to engage in dialogue with States. This is so clearly needed as a matter if urgency, especially with those who felt that they could not support the creation of the mandate. When my organization called for the creation of this mandate, we noted that an Independent Expert could help depolarize the issue of SOGI by highlighting that all countries and regions face challenges in addressing violence and discrimination on these grounds, and by highlighting and supporting positive developments as well as addressing violations. You will now, as part of your work, need to enter into deep, respectful and wise dialogue with many who may find even talking about this difficult. 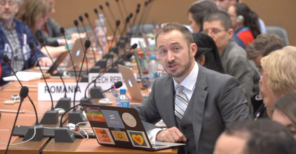 And as you engage in dialogue with States, we can share just a few lessons on this. After all, LGBTI persons are not only the affected populations, we are also the experts as change makers with governments and in our communities. Yes: I can share lessons on my work here in Geneva. But perhaps better said is that those defenders who live and work in the most hostile and difficult situations are the real experts. We know what works and what doesn’t in engaging with governments, and we welcome that that you have already noted that “government” is much larger than just the executive branch, or the Ministry of Foreign Affairs that we often encounter in UN spaces. Many of us are engaged in lifelong change movements where the slow and steady change of hearts and minds of other human beings is at the core of strategies. We know, often and sadly, that what we work for today will not be realised in our lifetimes. This is a longterm approach.

As you dialogue with States within this UN context, we feel that there will be a lot of use in going back to the preambular paragraphs. We fully agree that these paragraphs do not direct your mandate. That lies in the Operational Paragraphs. However, these preambular paragraphs are part of the resolution and set a tone. As you pointed out in your introduction yesterday, the second preambular paragraph, straight after a reference to the UDHR, immediately refers to the Vienna Declaration and Programme of Action:

"that while the significance of national and regional particularities and various historical, cultural and religious backgrounds must be borne in mind, it is the duty of States, regardless of their political, economic and cultural systems, to promote and protect all human rights and fundamental freedoms,”

This is at the core of the human rights framework. That obligation to promote and protect all human rights remain on States regardless of these cultural and other systems. However, as mentioned by others yesterday, we should perhaps also look at the other preambular paragraphs, in particular those that were added by States during the voting process. Whether we like them or not, what we hear in this paragraphs, and what we as civil society and affected communities hear in our own contexts, are the voiced fears about discussing and embracing discussion on these issues at the UN. Importantly, none of these inserted paragraphs mention SOGI, and they focus rather on how the conversation happens and other geo-political circumstances that surround discussions on SOGI but so many other issues. These preambular paragraphs focus on a few issues such as: - that human rights are for all people and not the few - that attention needs to be given to racism, xenophobia, an other forms of intolerance as much as other issues - that local, traditional and religious values systems matter - that discussions are also happening at local levels - that external pressures on a country, especially withholding international development aid, is not welcome - that some concepts or notions are not to be discussed internationally - that States are different There are fears and concerns expressed behind these paragraphs that are far wider than anything about a person’s SOGI. We may disagree with some or all of them; we may baulk at one or two. But we, and many others, who engage with those persons who are more cautious on embracing SOGI, we know that these issues come up again and again and again. These paragraphs are, therefore, not to be ignored and actually are a tool for navigating the more difficult dialogue that you will be engaged in as you seek to carry out your mandate. I wish to emphasize that no LGBTI person chooses by birth to be drawn into these geo-political discussions. We are, after all, simply human beings born free and equal in dignity and rights just like any other human being. I am sure you will continue to focus on this fundamental point as you carry out your mandate over the next few years, and we would suggest that you always focus on the persons, not the issues. After all, the very first preambular paragraph is the UDHR itself. All persons. All. We suggest that when the going gets tough, you keep coming back to the real stories and the clear data and information of the varied forms of violence and discrimination that we as population groups face that dehumanise us, that seek to strip us of our dignity and are, clearly, illegal under international human rights law. Even as we do not choose to get drawn into geopolitics, we are resilient and engage in these discussions because we are, quite literally, fighting for our lives and our dignity. We thank you for consulting with us, and we look forward to working with and supporting you over the coming years.